Well, what?
I feel like I'm kinda equipped for something, but I don't know what that is yet.
Barked out by chiiiiing at 12:50 AM 0 comments

Email ThisBlogThis!Share to TwitterShare to FacebookShare to Pinterest
Labels: Thoughts


While we were in Bangkok, the husband bought me this book because I was reading the summary on the back cover and burst out laughing at the reviews (one of them said "Totally worth it." --TREES). I also really love Liz Lemon btw.

With every book he gives me, I always insist he write a note in there, so I'll have an aid to remember the occasion or reason for the gift. I'm a sucker for books with messages.

So after paying for it he borrowed a pen from the cashier and wrote this: 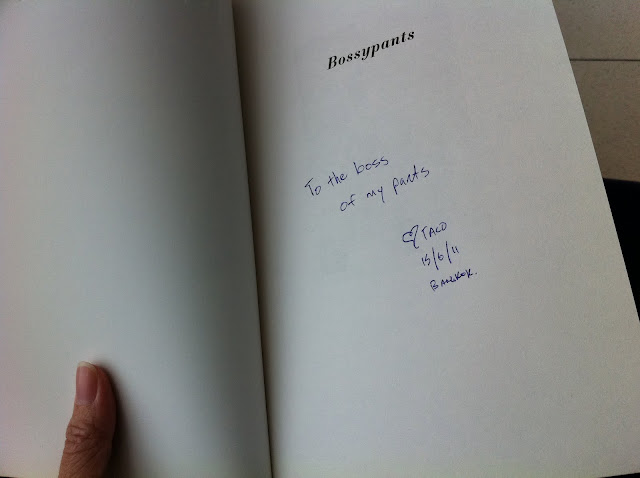 Yes. I married a smartypants.
Barked out by chiiiiing at 12:56 AM 2 comments

Email ThisBlogThis!Share to TwitterShare to FacebookShare to Pinterest
Labels: Life with the husband

Ever since I found out that I had cysts, I've been trying to be more conscious of trying to make better choices when it comes to the quality of life.

Sure, everyone makes their resolutions at the beginning of the year. Me, I'm a rebel you see, always living life on the edge, making resolutions in JULY. :o)
I'm trying to eat healthier. Less of eating outside food. Less of deep fried food fried in reused oil. Less MSG. Less processed meat. Less starchy carbs. Less sugar. When we cook at home, we try to keep it simple too, and I do like simple food where you can taste the ingredients. We never use MSG at home because we never found the need to.
I'm trying to not drink too much of coffee either. I started with 1 cup a day and last year I was getting used to 2 cups a day.. and I've now cut it back to 1 cup a day again. I do get sleepy after lunch but I have to consciously force myself to reach for green tea instead.
For the past 2 days, I've been taking a small breakfast in the morning (cereal and milk, my favourite!), followed by a juice of green apple, Sabah snake grass and lemon. My parents got the Sabah snake grass for me last week after I told them about the cysts. I know, what a weird name for a plant heheh. I'm supposed to take it every morning after breakfast.
I'm also trying to be a better person. Spend time with the people that matter. Be generous with encouragement. Trying not to fight over stupid things.
My grandpa is in the hospital now and I try to make it a point to see him on weekends just to try and feed him a meal or massage his legs or shoulders or something... anything! He has short term memory loss, but it seems that over the past few weeks while he was in the hospital, he seems to remember more than the usual. Apparently it's because he's now constantly being in the company of a lot of his family members, so it helps trigger and motivate his memory to work harder than usual (this is something Chak told me yesterday).
I'm trying to make better choices for leading this life of mine somewhere.
It's no mind-blowing manifesto.
Barked out by chiiiiing at 11:51 PM 0 comments

Email ThisBlogThis!Share to TwitterShare to FacebookShare to Pinterest
Labels: Thoughts

First look at my first shorts 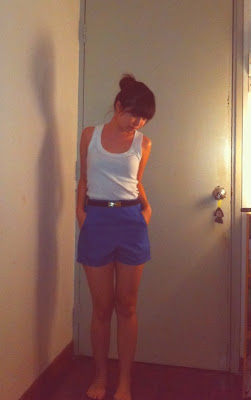 I finally finished my first pair of shorts on Sunday!

Unfortunately it was dark by then, and weekdays it's always dark when I get off work, so I haven't gotten the chance to take any nice photos of it.

Here's a dodgy first look: sits at the natural waist, two mid-sized pockets, slim waistband, and fitted without elastic gathers. As previously mentioned, it took me 2 rounds of muslin tests to get the fit right. I still think it can be improved, but at the same time I'm also glad it wasn't a disaster.

And it really turns out that sewing shorts isn't that difficult after all! I'm looking forward to sewing more.

Right now, I'd like to get started on drafting a bodice block on the computer.. If only I could sew day and night!
Barked out by chiiiiing at 11:08 PM 0 comments

Email ThisBlogThis!Share to TwitterShare to FacebookShare to Pinterest
Labels: Sewing 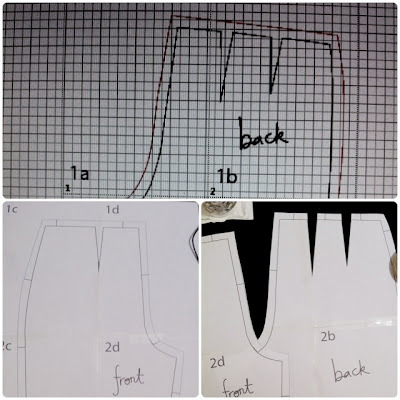 After skimming through Winifred Aldrich's patternmaking book, I decided it was time I start drafting them for real. I had always wanted to make shorts, but there were barely any shorts pattern available online for download (most of them were elastic shorts anyway, which were ok, but I guess I am looking for a zippered one).

Buying a good pair of shorts has always been a problem for me because my ass doesn't seem to want to fit in nicely into any shorts without looking weird (and bordering on camel toe offense). I suppose it's because of my child-bearing hips hehe.

So I tried drafting my own shorts using the book's instruction on developing a basic trouser block. Instead of using mahjong paper, pencil, the French curve and the other long tailor ruler I have, I thought hmm why not try using a program like Illustrator instead?

Unfortunately drafting a pattern on the computer doesnt necessarily make the whole process easier like you're using a patternmaking software where you'd input the measurements and wallllllla! Basically it's just manually drafting the pattern according to instructions but doing it on the computer with some aid from computer brains.

What it does make easier (to me at least) is:
1. Able to construct lines in exact measurement required (just click to create a line, specify how many cm you want it to be, and at what angle)
2. Able to draw and adjust curves without a French curve (or a round saucer)
3. Able to make adjustments on the same pattern after muslin test, erase old lines and reprint it as a clean new pattern
4. Able to keep backups of each version of the pattern, ie I have a basic shorts block saved with different dates denoting alterations, in case I want to rollback to a previous version.

After doing 2 muslin tests (which, embarrassingly, is the first instance I'm doing a muslin test despite sewing for a long time because I've always been too lazy), I've gotten the fit I want, and am sewing the actual shorts now.