Coco & Stravinsky sitting on a tree......!?!?!
Dayumm. I never know Coco Chanel and Stravinsky had a thing together. Thanks to Suzie Bubble (and thanks to the great fashion guru Evevon who recommended that blog), now I know. I've watched both the Coco movies (thanks to Jess-- hmm this is starting to sound like an award acceptance speech), and yes I would want to watch Coco & Igor too.
I had to study composers like Igor Stravinsky when I was doing music theory (I really hated it-- I kinda hate studying in general heh heh). There were four main periods of music; Baroque, Classical, Romantic and 20th Century.
Basically Baroque pieces make your left hand and right hand work out really crazily on the piano, kinda like making both hands run a race to see who can go fastest and has the highest stamina. It was insane.
Classical pieces are a bit easier, where your left hand is mostly playing accompaniment and not fighting with your right hand to be the g-kwok. Maybe people learned to relax a bit more then.
Romantic pieces are... hou romance loh. HAHA. They'd have a lot of emotive chords and make you feel a lot of warm emotions and also make you feel like you want to do lyrical dance in So You Think You Can Dance. Hmm.
20th Century pieces are a nightmare to play (for me). Not only do the composers come up with their own unknown chords that make you go o_O, their piano notations are written for people with 13 fingers instead of 10. Pure torture. And they'll change tempo and keys every 2 seconds just for fun. Stravinsky was one of them.
But now when I listen back to those pieces especially from the 20th Century era, I appreciate them so much more for their avant garde psychotrocity. Those composers were doing what artists like The Knife is doing today-- making music a form of art and sometimes, telling a story and taking you on a journey without even saying a word.
Here's one of Stravinsky's famous pieces. It's MAD.
I would like to study music again one day (by studying I mean reading Wiki hahahha). Learn all those songs I learned before in theory classes last time and understand them again.
Anyhoots, here's the trailer of Coco & Igor. Kinda NSFW.
Barked out by chiiiiing at 1:28 AM 0 comments

Email ThisBlogThis!Share to TwitterShare to FacebookShare to Pinterest
Labels: Music
I miss sewing.
Darnit darnit darnit :-(
Barked out by chiiiiing at 1:10 AM 0 comments

Email ThisBlogThis!Share to TwitterShare to FacebookShare to Pinterest
Labels: Sewing

This year in music: Fembots!

Everyone's paying some kinda sci-fi homage in their music. I love Janelle Monae's and Kelis' albums. Unfortunately I can't say the same for Christina Aguilera's robotic mishap :-S
Barked out by chiiiiing at 9:04 PM 0 comments

Email ThisBlogThis!Share to TwitterShare to FacebookShare to Pinterest
Labels: Music

I'm gonna kidnap you with the help of my family...
... you just wait and see, you'll belong to me me me me me meeeee
Barked out by chiiiiing at 11:12 PM 1 comments

Email ThisBlogThis!Share to TwitterShare to FacebookShare to Pinterest
Labels: Home

Beeyotchmode
Sometimes people are talking but all I hear is bla bla blaaaaa
I just want to stud the whole world and then get octagon and subway tiles and have the happiest bathroom in the land.

In other news.... I love my brothers and sisters at work. We're one noisy idiotic bunch of bradies.
Barked out by chiiiiing at 4:08 PM 1 comments

Email ThisBlogThis!Share to TwitterShare to FacebookShare to Pinterest
Labels: Home

To be honest? I'm not big on weddings with cultural customs-- the big extravagant lavish Chinese wedding where they play The Final Countdown when the waiters serve the first dish, and the bride doing 3 wardrobe changes during the dinner (this is a bummer because I doubt the bride gets to eat much of the food and in my book this isn't really fun).
If we could elope, we would. I always joke when people ask where will our wedding dinner will be held, saying that we're eloping to Vegas and getting married in a fake Elvis church. Only that I'm serious :P OKAAAYYY, half serious.
I'm not a fan of big extravagant poofy expensive wedding dresses where the bride has to make extra effort to walk one step and how much $$$ they cost, because I just want a dress that I can shimmy comfortably in and be able to do the robot dance without causing an unnecessary tear that reveals your rear (in granny underwear).
And, I'm not going to learn any proper ballroom dances just so that my husband and me can WOW the crowd by dancing the "first dance" (as if we never danced together before). We're just going to to do the robot dance, if anything.
And if my hair pins fall out and my mane looks crazy like a mad chewbacca in heat, then all the better for the pictures! You only get married to your beloved once, so let your hair down, have fun, and make monkey faces. One day you'll get so saggy nobody will notice you're making a monkey face even when you're making one. 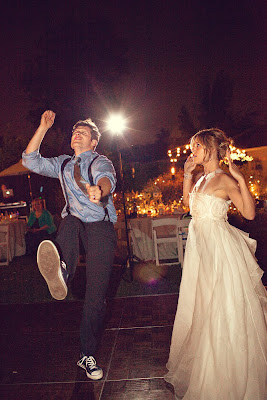 Picture via Snippet & Ink
Barked out by chiiiiing at 11:35 AM 3 comments

Email ThisBlogThis!Share to TwitterShare to FacebookShare to Pinterest
Labels: Life with the husband 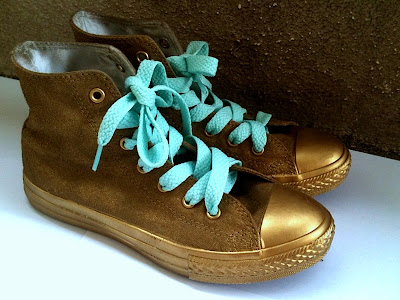 Some nuttery happened with the gold spray a few weeks back. It was 1AM and I had a calling to finally do it! I have been looking all over for a pair of high tops to spray gold since last year. I searched in Bata and was told their largest size did not fit me because their high tops were made for guys (ptui!), in Kamdar's school shoes section too (no hep), and in Converse (ok got size but so expensive kns).
Then suddenly for my birthday my husband bought these Converse shoes for me to play with. My first reaction was "Acckkk why you go and spend so much money!?!?!?!" and I was so afraid to do anything to them because they were pretty expensive (probably the most expensive pair of shoes I've ever had)...
-_____-"
Long story short (too late for that, hah!), I finally did it. I also replaced the laces with bright cyan ones, coz you know, the gold ain't attention-grabbin' enuff, numsayin?
Now where's my rap soundtrack in the background...
Barked out by chiiiiing at 7:16 PM 2 comments