Top 5 ways to know when someone just took a dump in the toilet:

5. The Palmolive Hand Soap bottle is moved from its usual place at the sink to anywhere within a 30 centimeter radius of the toilet bowl, be it the floor, or shelf, or the toilet bowl top cover.

4. You suddenly find strange objects lying on the usually empty shelf by the toilet bowl, ie a nice man-ring

2. You see some sisa-sisa in the bottom of the bowl, ie floaters

1. The toilet smells like KFC.
Barked out by chiiiiing at 8:31 PM 4 comments

Email ThisBlogThis!Share to TwitterShare to FacebookShare to Pinterest
One of the many reasons why I salute the Japanese

Oh man this made me laugh so hard my tummy ached. Thanks Chern Liang!
Barked out by chiiiiing at 8:26 PM 1 comments

God have mercy on the woman who marries this man.

Homer has got to be the most ridiculous man ever. He's so useless, he only has emotions for:

Oh and chilli cookouts, Duff Beer, and going to Moe's (but I still feel donuts still hold the supremest reign).

Marrying someone like Homer would only drive me INSANE. Whenever he pulls a stupid gag, I always cringe and think "Oh God please NEVER let my husband be like that!" My heart goes out to Marge for the stroke of bad luck.

"When Marge insists on the weekly hour for the family without TV, they decide to spend the time looking through the family photo albums. Bart and Lisa comment on the lack of baby pictures for Maggie, so to explain for it Homer starts a long story beginning with Maggie's conception and birth. Homer hated working at the Springfield Nuclear Power Plant, and had a dream job of working at a bowling alley. Through "careful" budgeting, he managed to make that dream come true. He quit the power plant, and went to get a job at Barney’s Bowl-A-Rama. It meant less pay, but also less stress, a friendly atmosphere, and enabled them to have just enough money to get by with the four of them.

However, when Homer and Marge "snuggled" to celebrate this development, she became pregnant.

Homer was not happy when he found out about the new baby, and completely unenthusiastic about the impending birth. Because of the financial problems caused by the pregnancy of the baby, Homer was forced to quit his dream job and go back to the Power Plant. Mr. Burns smugly allowed him to return, but only after placing a plaque in Homer’s station saying "Don’t forget: you’re here forever", to remind him that he could never quit again. As much as he dreaded the idea of having another child, as soon as Maggie was born, Homer immediately fell in love with her. When Bart and Lisa still don't understand what that has to do with Maggie's pictures, Homer just merely mentions that they're in the place where he needs them the most. The scene then cuts to his workplace with all of Maggie's pictures positioned around the plaque to alter it into saying "Do it for her.""

And that's when I fell in love.

If I married Homer, I'd still be pissed off at him on a daily basis, but I'd still remember why I loved him in the first place. So here's a picture that's very close to my heart, of me sharing a tender moment with Homer (sorry Marge, pinjam a while ah pls): 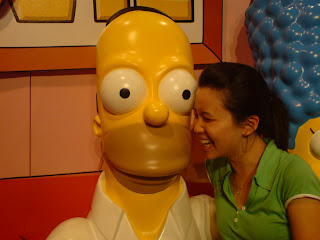 A tender moment indeed
Barked out by chiiiiing at 2:19 PM 5 comments


I believe that unisex toilets create great opportunities for epics. This is what happens when your office has a common unisex toilet.

Girl gasps, eyes wide open, and runs back to her desk.

Guy slowly walks out nonchalantly, turns and looks at the girl, and he says "Er... ahem. I was just sitting down lah. *nervous laugh* "
Barked out by chiiiiing at 12:58 PM 5 comments